Once again a chilly weekend in February heralds the annual Kidlington Chess Congress. Playing for the fourth year in the Under-180 section, I was looking to improve on last year’s 50% score. 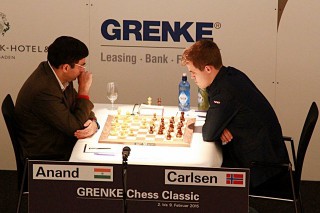 Vishy Anand and Magnus Carlsen were playing in the Grenke Classic in Germany while we played in Kidlington.

Like last year I ended on 2.5 out of 5, giving me 50%: I suppose that’s pretty reasonable, but it would have been nice to have a win on the second day. Especially since the computer says I missed good moves in both those games. On the other hand, I won because of unforced errors in two other games, so maybe all this stuff evens out in the end.

UPDATED 12.02.2015 My game analysis with comments is here and the full cross-table results for the U-180 section is here.