I’m sure I could almost create a standard template for these posts now: it’s the sixth year I’ve played this tournament and here is a brief summary of what happened as I played again in the Under-180 section: 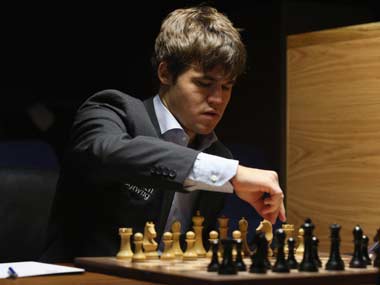 The new World Champion, Magnus Carlsen: not playing at Kidlington

Overall I’m a little disappointed with my results this year: that’s the first year I can really say that so I probably shouldn’t complain.

The games were very long (all over three hours except the first, with the last one being nearly three-and-a-half) so it was very tiring. Because of my performance and the length of the games, I spent a huge amount of game time feeling rather low about how I was doing. Although I ended up on 50% overall, I only snatched that in the last minute of the final round. Given that I scored higher last year against much stronger average opposition makes this year’s results look poor by comparison.

Having said all that, it wasn’t a disastrous performance: two wins, one draw, two losses. My grade for the tournament was only about 140 (last two years it has been 160+), but that’s not a disgrace.

I’m most disappointed about how I played in the openings, particularly. If there’s a lesson to be learned from this event, it’s that I need to learn some lessons about openings! Mistakes in the opening ultimately cost me both games I lost and perhaps prevented me from doing better in the drawn game. Learning to handle openings better will no doubt improve my play generally, although there’s a lot of time required to do this that I don’t really have.

Beware future competitors of Kidlington 2015, I’ll be up for personal revenge!

Final word of congratulations to local girl Zoe Varney who was joint winner of the lower Under-145 section with 5 out of 5. Worrying thing is, she might be in my section next year… !