Once again chess enthusiasts from across the country gathered on the first weekend in February for the Kidlington Chess Congress: we had (almost) a full house with 180 players in attendance. 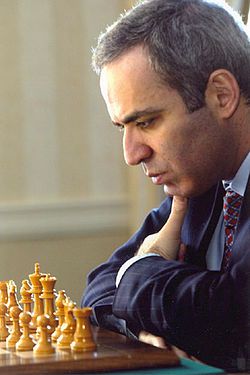 Despite being retired, Garry Kasparov chose not to play at Kidlington this year.

So 3.5 out of 5, which is the best I’ve ever scored in this section, just a shame I didn’t edge out the last game to make it 4 out of 5, which would have given me a share of the Second Place prize! Still very pleased, I’ve estimated my grade for the tournament is about 175, which is fighting well above my weight (listed grade is 161). Staying unbeaten for the entire tournament is also a first for me (except for one occasion many years ago when I played in the lower-graded section against significantly weaker opposition) and so I should be extremely happy overall with my performance.

UPDATE 09.02.2020:My own analysis of my own games with commentary is available and also the full tournament results