Update 5 February 2013: I’ve uploaded my game commentary and analysis for this year’s games. 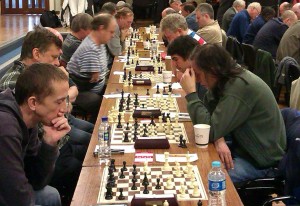 Playing once again with the stronger players in the Under-180 section, my first round match got off to a slight false start: my opponent hadn’t turned up. In fact, two players (both with the same surname: “They’re brothers”, said someone) were both missing. I was re-paired with the person waiting for the other brother after the tournament controller contacted the brothers and discovered travel problems or similar. My revised opponent and I moved to a spare board, an interesting novelty for which was that we got to play using one of these new-fangled digital chess clocks: 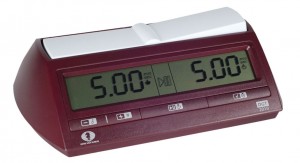 Since I was a child, I’ve only ever used the standard, analogue, wind-up clocks: 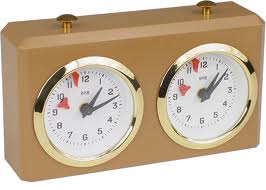 How exciting. 😉 (For what it’s worth, the digital chess clocks have some advantages: they allow more accurate timing for a start and also permit some more creative time controls, such as a time increment for every move played. They do need batteries, though.)

Anyway, on with the show…

Once I’d finished I looked at the scores and remaining games and noticed that I was, at that stage, the highest-placed First Round Loser: a position for which there was a prize. There were two ongoing games where all four players had 2 out of 4 and had lost their first round game: so, if both those games were drawn I’d win the prize outright. However, both those games were decisive and I had to share with two others. That meant a Massive Cash Prize(TM) of one-third of £45.

Later on, it turned out that our little “team” (an ad-hoc collection of four players: one local girl who I know plus two of her friends, plus me) were in the running for the Team Prize: in the end, the Team Prize was also a one-third share of £45, because three teams tied on 12.5 points. So, each person on each winning team collected one-quarter of one-third of £45: £3.75 😉

So after a good weekend where I played some good games and made very few mistakes, it was nice to pick up a grand total of £18.75 – of course, the money was just a nice bonus and didn’t even cover my entrance fee(!): it was satisfying to have played so well. My grade for the tournament was 168, pretty good: my listed grading might actually go down very slightly from 159 to 157 when next published, strangely, partly because my current rating is boosted by some good games I played in Kidlington 2010 and those games will “drop off” the end of the calculations; Kidlington 2011 wasn’t so good, grading-wise. A good tournament next year should push me over 160.

Posted in Uncategorized on 4 February 2013 by davee
Comments Off on Kidlington Chess Congress 2013: points make prizes!