It’s that time of year again, the Kidlington Chess Congress: I’ve played here on each of the last three years too. See my old articles from 2009, 2010 and 2011. 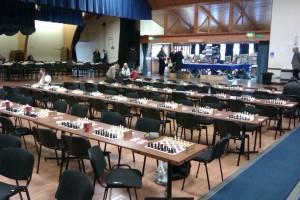 An empty playing hall just before the start of the final round.

For the last two years I’ve played sufficiently well in the Under-145-graded section to obtain a grade above that level: so this year, I played in the Under-180 section. My official ECF grade is 154.

It was a very cold start on Saturday morning (-8’C at dawn) and it didn’t help that the heating wasn’t working at the venue: it wasn’t as bad as it sounds, though, because pretty soon the heat generated by 150+ competitors thinking deeply warmed the place up. And then the heating started working anyway… So, as usual, here’s the round-by-round summary: 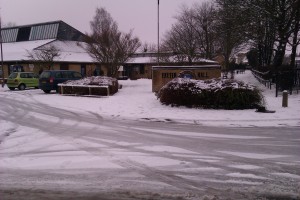 Snow outside the venue at the start of Day Two

Snow arrived during the evening round of Day One and so this made for some travel complications for some competitors, which was unfortunate: not so for me, however, just living a short walk away. Everyone who arrived at the venue on the morning of the second day was pleased to find the heating still working!

The disappointment of losing the Round Three game was hard to take, but I’m pleased with my performance overall in the tournament. I have calculated that my grade for the tournament is 159 or 160, depending on whether they round up or down(!) And, my ongoing grade on the next grading list will also be about 160, I think, up from this year’s 154.

Posted in Uncategorized on 6 February 2012 by davee
One Comment »

One Response to Kidlington Chess Congress 2012